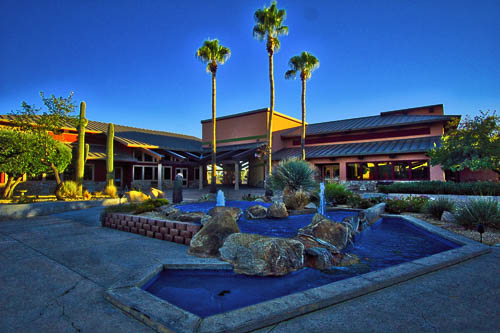 OUR RICH WESTERN HISTORY
IT ALL STARTED WITH ROY ROGERS AND DALE EVANS!

Sales of Happy Trails lots started in January 1985. However, the Resort’s Grand Opening ceremonies and celebration were delayed until January, 1986 due to construction delays of the ballroom. The Resort’s Grand Opening was attended by the King of the Cowboys, Roy Rogers; his son Dusty Rogers; and the Queen of the West, Dale Evans. For those too young to remember this couple, Roy came to movie theaters in the 1940’s and 1950’s as a singing cowboy in nearly 100 films.  In the 1950’s, the Roy Rogers Show was in our homes every week for six years in a western-themed television series.  Roy and Dale were shining examples of “good guys” from the Old West.

Roy and Dale gave their name to the new Thousand Trails RV golf and travel resort named Roy Rogers and Dale Evans Happy Trails Resort.  All the streets are named for elements in his films and TV shows, as well as elements of the southwest, such as plants, trees, etc. Examples are Spur, Lariat, Powder Horn, Desert Sage, Tumbleweed, and others.

The first buyers came in on Bell Road that was either muddy or dusty depending on the weather. Most of the time it was dusty.   When it was muddy, it was very slippery, and we towed many RV’s and vehicles out of the ditch.  The road was graded every so often, so it was not too bumpy.

In the 1985 snowbird season, 151 lots were sold. The people purchasing were the pioneers who settled in Happy Trails when it was only an idea of how great it would become.